We Are The Premier Private Label Antarctic Krill Oil Manufacturer Located In South Florida. We Can Help Supply You With Some Of The Highest Quality Pharma-grade Krill Oil To Offer Your Customers.

We will examine the benefits and the business behind selling Antarctic krill oil supplements so that you’re able to make an educated decision on whether or not it is the type of supplement that will work well with your brand’s product lineup.

As mentioned, each supplement has its own market advantages, so below we’ll discuss prominent market indicators in more detail to determine the opportunity that Antarctic Krill Oil supplements can provide your brand.

Between 2004 and 2009, search engine queries for “antarctic krill oil” and “krill oil” saw a steady increase in popularity. One possible explanation for this positive trajectory is the market increase in omega-3 acid-containing supplements during this time, mainly due to heightened media focus on their potential cancer-preventing properties. Market research found that even when other supplements remained stable or decreased during this period, there was an increase in the use of krill oils at the same time.

*To be clear though, this product is not intended to diagnose, treat, cure or prevent any disease.

After this increase in popularity, monthly searches for krill oil remained consistent until the later part of 2019. Since December 2019, there has been a steady and ongoing rise in search engine popularity. In fact, between this time and August 2020, popularity for krill oil increased by 33%, averaging over 68,000 searches per month.

Like other natural health supplements, Antarctic krill oil is utilized by consumers for a variety of purposes. Some consumers buy this product due to its possible mood-boosting properties, while others consume it for its rumored ability to reduce the severity of PMS and menstrual-related pain. Recent research has also linked krill oil to cardiovascular benefits due to the EPA and DHA found in the supplement.

Another reason why consumers buy krill oil supplements is that unlike fish-oil, Antarctic krill oil contains a unique type of omega-3, offering that is known as the phospholipid advantage. Phospholipids are different from omega-3 triglycerides in a structural essence. This difference allows phospholipids to be absorbed by the body quicker, whereas other omega-3s must first be delivered to the liver and processed before they are absorbed. This difference is another reason as to why people buy krill oil over other omega-3 supplements.

Krill oil is derived from a tiny shrimp-like animal that is primarily consumed in nature by sea lions, whales, penguins, seabirds, squids, other fish species, and sharks.

The potency of Antarctic krill oil supplements is highly dependent on the concentration of the carotenoid, astaxanthin, which gives krill it’s rich deep red coloring. This compound is a powerful antioxidant with the ability to cross the blood-brain barrier, something that fish oil has not been found to do.

Astaxanthin has also been shown to provide krill oil with its cardiovascular support as the compound protects low-density lipoproteins and lipids from oxidation which in turn increases HDL cholesterol levels.

Which Antarctic Krill Oil Supplement Is Right For You?

Private Label Express offers a wide selection of stock Antarctic Krill Oil solutions for you to choose from allowing you to find the perfect product to suit your brand and set you apart from the competition.

Your purchase includes all printing and packaging in your name, ensuring the product is fully branded and ready to go when you receive it.

When it comes to competing with brands around the world, we understand what it takes to help power you to the next level of your success. Make our team part of your team today and experience the difference in having an FDA-inspected, GMP Certified, nutritional supplement manufacturer on your side. World-class production capacity, industry-leading turnaround times, pharmacy-grade products, unparalleled support.  We offer many other private label supplements besides Fish Oil Contact us and we can tell you more. 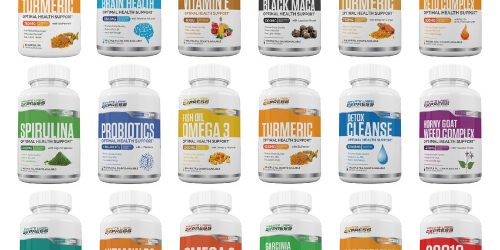 When it comes to competing with brands around the world, we understand what it takes to help power you to the next level of your success. Make our team part of your team today and experience the difference in having an FDA-inspected, GMP Certified, nutritional supplement manufacturer on your side.